This morning board our flight for Selous. Located in southern Tanzania, Selous is one of the largest game reserves in the world. With no permanent human habitation, large numbers of elephants, hippos, Cape buffalo, and crocodiles flourish in this remote wilderness. Transfer to Sand River Selous, your home for three nights. Situated on the Rufiji River, each open fronted cottage offers panoramic views of the river where you can observe resident wildlife from the comfort of your veranda.

Spend two full days exploring savanna, wetlands, and extensive woodlands by 4×4 vehicles, on walking safaris, and by river boat. A cruise along the Rufiji River may reveal vast flocks of great white pelicans, wallowing families of elephants, or a pride of lions sleeping off a meal. Birders search for southern ground hornbills, bateleur eagles, white-headed lapwings, and endemic Udzungwa forest partridges and rufous-winged sunbirds, among the 350 recorded bird species. Of the over 400 species of animals that congregate in Selous during the dry season, herds of Lichtenstein’s hartebeest, greater kudu, impala, Burchell’s zebra, and blue and white-bearded wildebeest are common sights. The reserve also provides important habitat for endangered black rhinos and African wild dogs.

This morning board our flight to Ruaha National Park, the largest national park in Tanzania. Check in to Kigelia Ruaha, your home for the next three nights. Simply built with locally crafted pale wood furniture to enhance, yet not distract from, the beauty of the natural bush setting, it is the perfect spot to explore the incredible wildlife of Ruaha National Park.

Ruaha is famous for its large population of elephants, estimated to number over 10,000. A popular destination for birdwatchers, over 500 species have been identified, with several resident species of hornbills, kingfishers, and sunbirds, including the endemic Ruaha red-billed hornbill. An incredible variety of antelope can also be found here including eland, roan, oribi, Grant’s gazelle, and sable. From open game-drive vehicles and during leisurely hikes, observe Ruaha’s abundant wildlife and dramatic terrain. Open plains are filled with baobab, back-dropped by iconic purple-tinged hills, and riverine bush and dry river beds provide cover for kudu, sable, and elephants while huge herds of buffalo and scores of giraffe occupy the wide open spaces. Big cats are also plentiful—leopards, cheetahs, and prides of over twenty lions are not uncommon. The Ruaha River provides habitat for huge Nile crocodiles and pods of hippos.

Rise early this morning for our flight to Katavi National Park. Check in to Chada Katavi. Designed to blend in with the surroundings, each spacious tent offers expansive views of the Chada Plain and the constant stream of wildlife. After settling in, depart on your first game drive in Katavi National Park.

Katavi, in the far west of Tanzania, is a seldom-visited wilderness that is almost untouched by humans. The park centers on a series of wide flood plains where large herds of Cape buffalo and elephants can be found. Your visit is timed during the dry season, when shrinking pools and watering holes fill up with huge pods of hippos, and all kinds of animals are drawn to dwindling seasonal rivers. Search for wildlife during game drives, while bush walks across the endless golden plains offer the opportunity to observe more timid creatures that often take flight at the sound of a vehicle.

This morning our flight departs for Mahale National Park which lies on the shores of Lake Tanganyika. Since there are no roads or other infrastructure within the park boundaries, we transfer from the airstrip to the park via boat. Arrive at Greystoke Mahale situated on a pristine, white sandy beach overlooking the turquoise water of Lake Tanganyika, with the forested slopes of the 8000-foot-high Mahale Mountains rising behind.

Mahale is one of only two protected areas for chimpanzees in Tanzania, and the population here is the largest in the country. Japanese researchers in the 1960s, have habituated the chimps to the presence of human observers. Hike into the mountains with local guides to search for the chimps, with the opportunity to sit quietly to watch them go about their daily lives. 335 bird species have been recorded here. Other activities include dhow cruises and fishing in Lake Tanganyika, strolling the forest trails, or simply lounging on the sandy beach to soak in your surroundings.

Enjoy one last morning hike through the jungle before boarding our flight to the Kilimanjaro airport. Board your independent international flight this evening. Arrive in the USA the next day. 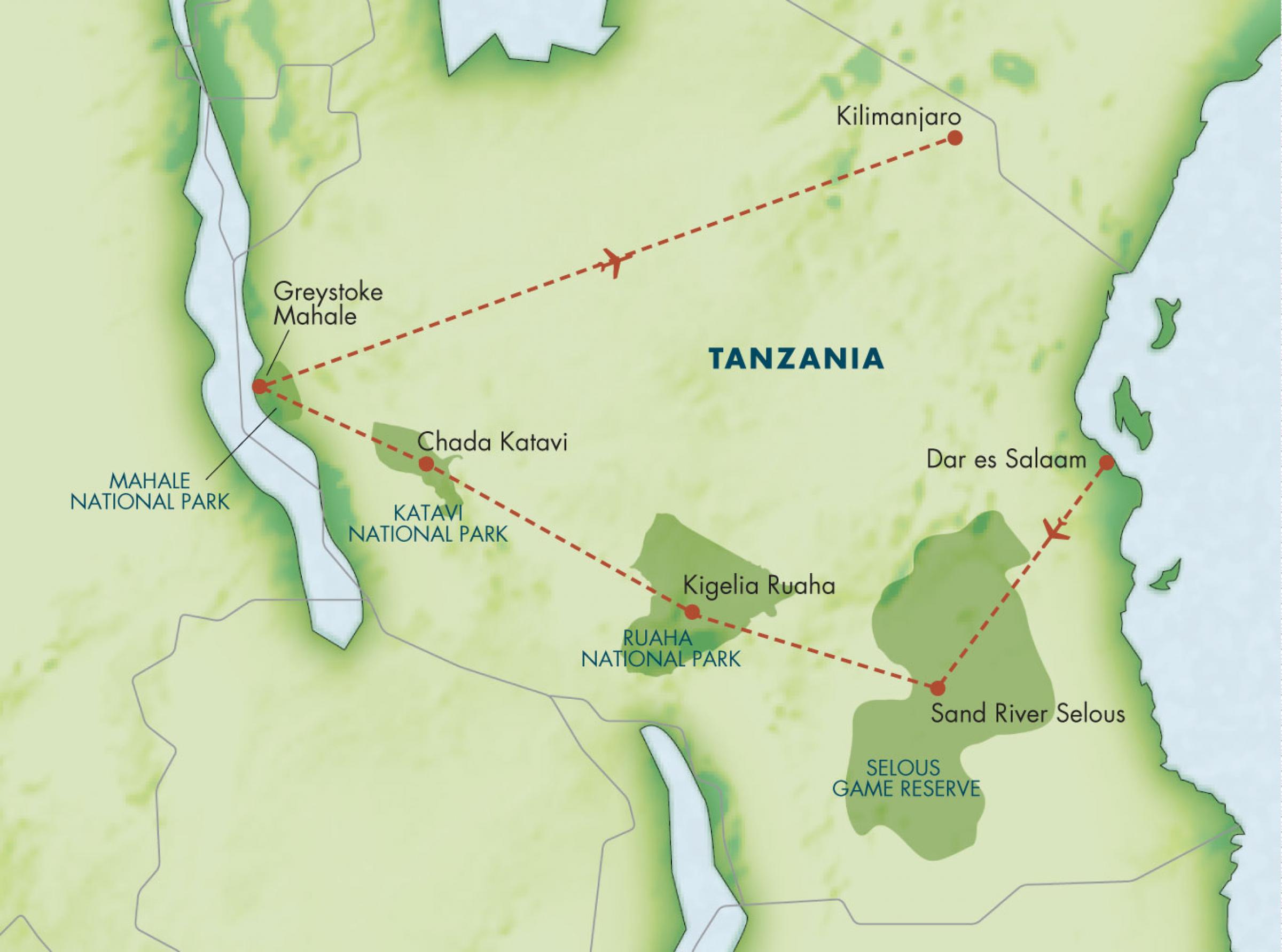