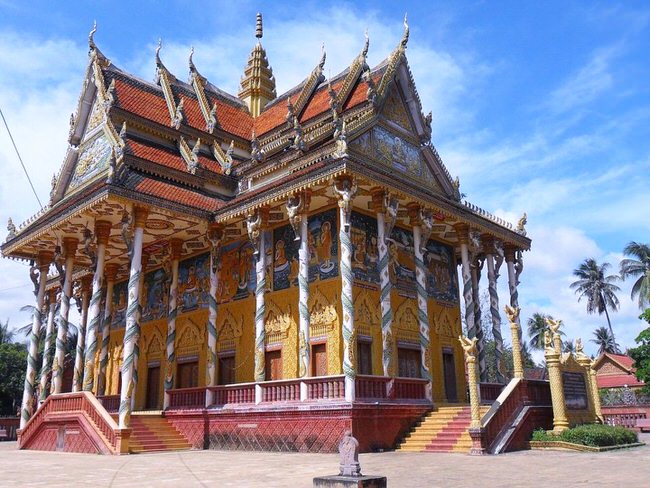 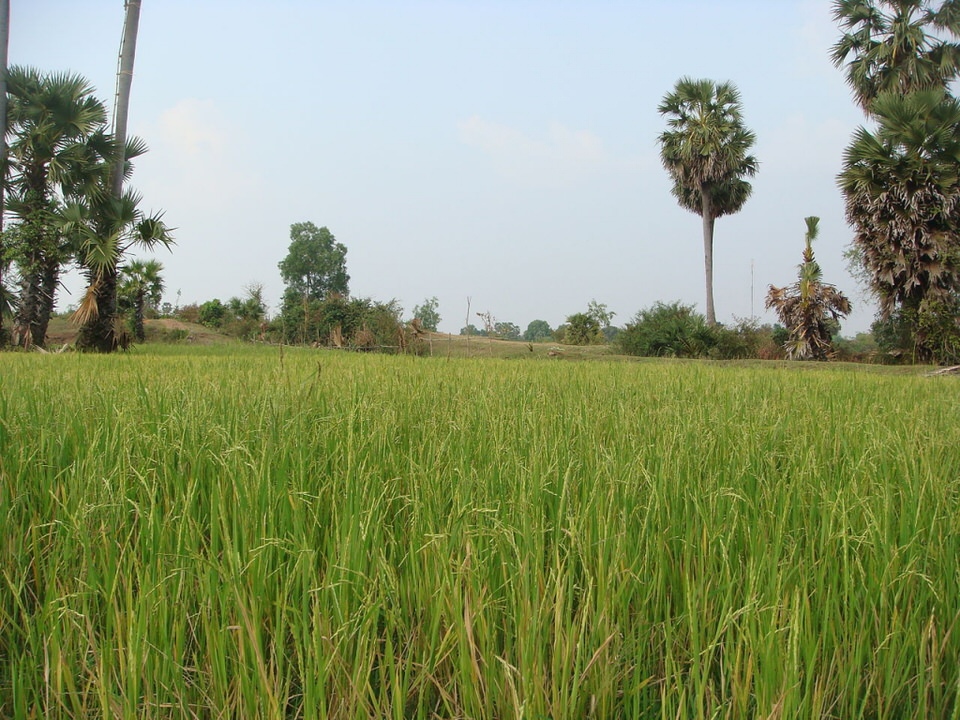 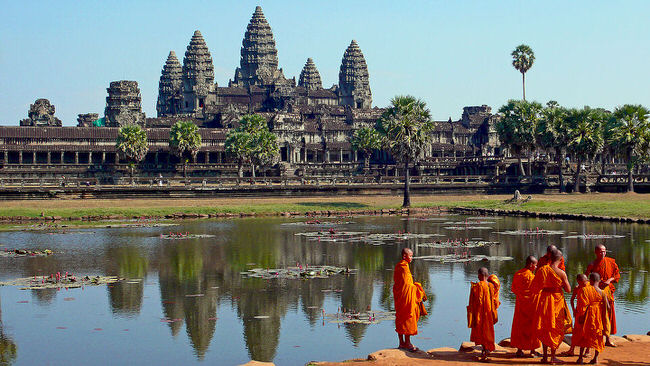 Cambodia’s stunning natural beauty and friendly people are fast becoming favorites of the well traveled, as the nation welcomes a peaceful era in its history.

Only recently opened to tourism, Cambodia has quickly become a top destination for travelers, lured by the Angkor Watt, the “eighth wonder of the world,” the unspoiled beaches of Sihanoukville and the rich and often tragic history of Phnom Penh.

Cambodia vacations tailored by our Virtuoso Cambodia specialists get true value; free room upgrades, plus extraordinary family and group specials. For the best results start with our vacation planner and get connected to our Virtuoso, Travel Advisor that specializes in Cambodia. You’ll prevent costly mistakes, get the best airfare, luxury amenities, free upgrades and enjoy planning your trip. We do everything for you, air, car, hotels and transfers.

Phnom Pehn, Cambodia’s capital is considered the loveliest of the French-built cities of Indochina, it was founded as a small monastery in 1372 by a rich Khmer woman called Penh after she found four Buddha statues in a tree trunk on the banks of the Mekong. She set up the monastery on a nearby hill – or ‘phnom’ in Cambodian.

Besides it’s rich nightlife there are many attractions in Phnom Pehn: WAT PHNOM: a temple and location of the first pagoda on this site built in 1372 by ‘Penh’ to house the four Buddha statues found on the banks of the Mekong. It is the only hill (27 meters) in the capital.

WAT OUNALOM: a very important wat comprising 44 structures facing the Tonle Sap Lake and built in 1443 to house a hair of the Buddha.

ROYAL PALACE AND SILVER PAGODA: the royal palace stands on the site of the former citadel, Bantey Kev (built in 1813). Visitors are not allowed in some portions of the grounds, as the palace is the official residence of King Sihanouk. The silver pagoda is often called the Pagoda of the Emerald Buddha or Wat Preah Kaeo after the statue housed there. The wooden temple was originally built by King Norodom in 1892 and inside, its floor is comprised of more than 5000 silver blocks which together weigh nearly 6 tons.

NATIONAL MUSEUM: designed by a French archeologist and painter, George Groslier, in Khmer style in 1920 to exhibit works previously scattered throughout the country. It contains a collection of Khmer art including the beautiful 6th century bronze statue of Vishnu.

TUOL SLENG MUSEUM (Museum of Genocide): formerly the Tuol Svay Prey High School, in 1975 it became the Khmer Rouge’s main torture and interrogation center. It was known as Security Prison 21 – or just S-21.

CENTRAL MARKET: a covered market distinguished by its central dome (built in 1937). It is filled with shops selling jewelry, fabrics and all kinds of souvenirs. A great place for browsing.

The kingdom of Angkor was probably established in 802 A.D. by King Javarman II. Javarman and each successive ruler built spectacular monuments and temples throughout the thirty square kilometer area, but the foremost structure is the Angkor Wat temple dedicated to the Hindu god Vishnu by King Suryavarman II, who reigned between 1131 and 1150. It was constructed over a period of 30 years and is world famous for its beauty and splendor. Angkor Wat features the longest continuous bas-relief in the world, which runs along the outer gallery walls and narrates stories from Hindu mythology. In 1992 the UNESCO declared the monument and the whole city of Angkor a World Heritage Site.

The kingdom of Angkor was conquered by the Thais in the fifteenth century and the wats and monuments were abandoned to the jungle, and they were partially destroyed and lost until they were rediscovered by a French expedition led by Ernest Doudart de LagrÃ©e during their attempt to survey the northern reaches of the Mekong River in search of a trade route to China.

During the all too few peaceful moments in recent Cambodian history, international teamss from Japan, Germany, France and the United States have been restoring these incredible temples – built from stone without the use of cement, to their former glory.

ANGKOR THOM: a fortified Royal City (10 square kilometers) built by King Jayavarman VII, who ruled from 1181 to 1201. The city has five monumental gates and is encircled by a moat 100 meters wide. In the center of the walled city are the city’s most important monuments including Bayon, Baphuon, the Terrace of Elephants, the Terrace of the Leper King and Phimeanakas with Royal Enclosure.

BAYON: Jayavarman VII’s temple mountain that stands at the center of Angkor Thom. It is one of the most popular of Angkor’s monuments and a place of narrow corridors, steep flights of stairs and an amazing collection of towers decorated with over 200 smiling faces.

BAPHUON: the pyramid shape represents the mythical Mount Meru and marks the center of the city that was here before Angkor Thom.

PHIMEANAKAS: near the center of what was once the royal palace within Angkor Thom. Phimeanakas means ‘Celestial Palace’, though today there is not much left to indicate its former splendour.

FORMER ROYAL PALACE: nothing remains today except two pools that were used by royalty for washing.

TERRACE OF ELEPHANTS: this terrace was used for viewing public ceremonies and was a base for the King’s grand audience hall. The famous lines of elephants are at either end of the retaining walls.

TERRACE OF THE LEPER KING: North of the Terrace of Elephants is a platform named ‘Terrace of the Leper King’. On the platform is a nude statue – one of Angkor’s mysteries.

PHNOM BAKHENG: hilltop temple ruins which provide one of the best views of Angkor Wat, especially at sunset

Come back the following day to see: ANGKOR WAT: a temple dedicated to the Hindu god Vishnu by King Suryavarman II, who reigned between 1131 and 1150. It was constructed over a period of 30 years and is world famous for its beauty and splendor. Angkor Wat features the longest continuous bas-relief in the world, which runs along the outer gallery walls and narrates stories from Hindu mythology. In 1992 the UNESCO declared the monument and the whole city of Angkor a World Heritage Site.

Visit Ta Prohm: TA PROHM: one of the most popular attractions of Angkor as much of the jungle has not been cleared and it looks very much as most of the Angkor monuments would have appeared when European explorers first stumbled across them.

Visit Banteay Srei Temple: BANTEAY SREI: built in the late 10th century, it is a Hindu temple dedicated to Shiva. The temple is square with entrances on the east and west. Of main interest are the three central towers which are decorated with male and female divinities and beautiful filigree relief work.