SeaDream uses the port of Bridgetown as the hub for their Southern Caribbean voyages as well as some of voyages that cross the Atlantic. The Island itself includes Unesco Heritage Sites, excellent beaches and history dating back to 1628. The climate is tropical with constant warm temperatures during the year cooled by light trade winds.

Soufriere, a small town on the South West Coast of Saint Lucia is considered by many as the island’s gem. The town and the surrounding region has a population of 8,000. Originally founded by the French it was the original capital of the island. Soufriere has a great deal to offer visitors including coral reefs, the rainforest, Diamond Falls, the sulfur springs, a “drive in” volcano and the ever popular and majestic twin pitons. Check the Land Adventure options as we feel certain you will enjoy them. You may also sit back in one of the Balinese dream beds and witness a beautiful sunset.

Charlotteville is a small, quiet village on the northeastern tip of Tobago at Man-o-war Bay. It is a tiny fishing village surrounded by hilly rainforest that opens up to the Caribbean sea. There are plenty of hiking trails that lead around the bay and up to the hills. For the energetic guest, try the hike to Hermitage or to Campbelton Beach. One of the highlights of the area is the Buccoo Reef National Park. This reef has an incredible ecosystem that simply should not be missed.

Union Island, the southernmost island of the Grenadines, is nicknamed the ‘Tahiti of the West Indies’ due to its volcanic silhouette. Among the many restaurants and bars, Happy Island, a man-made island featuring a bar, sits in the middle of Clifton harbor and is a must-see. Mount Taboi, which at 999 feet above sea level, is the highest peak on Union Island. A key feature of the Union Island region is the Tobago Cays National Marine Park. The Tobago Cays are a group of small uninhabited islands surrounded by reefs, where snorkeling, scuba diving and swimming with sea turtles are all favorite pastimes. 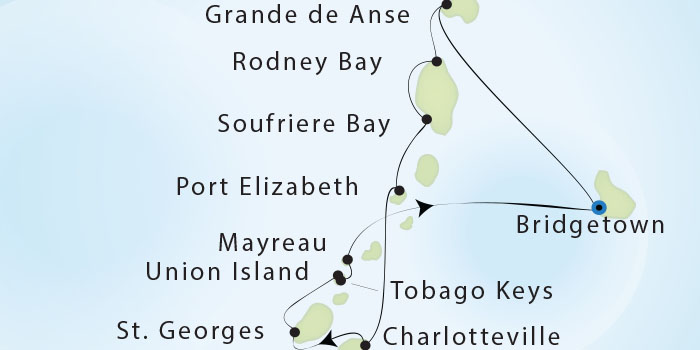 9 Days Caribbean Cruise From Barbados To Saint Lucia,Saint Vincent and the Grenadines