Although no written record of the island’s discovery by Europeans exists, it was in 1499 that Alonso de Ojeda landed in Aruba and claimed the island for Spain. Over the years, possession changed from the Spanish to the Dutch to the British and back to the Dutch, with independence promised by 1996. Aruba is one of only a few Caribbean islands where the indigenous Indian population was not decimated by invading Europeans.

The native Aruban today is a mixture of Arawak Indian, and Spanish and Dutch colonizers. The official language is Dutch, with both English and Spanish widely spoken. The local population’s everyday tongue is Papiamento, a mixture of all of the above plus a few words left over from the days of the Arawak.

The countryside is dotted with cottages surrounded by cactus fences and bright splashes of bougainvillea, oleander and hibiscus. During our call, enjoy a stroll through the capital, Oranjestad. Colorful Wilhelminastraat is lined with typical Aruban buildings of the Dutch Colonial style, and plenty of shops offering duty-free goods. 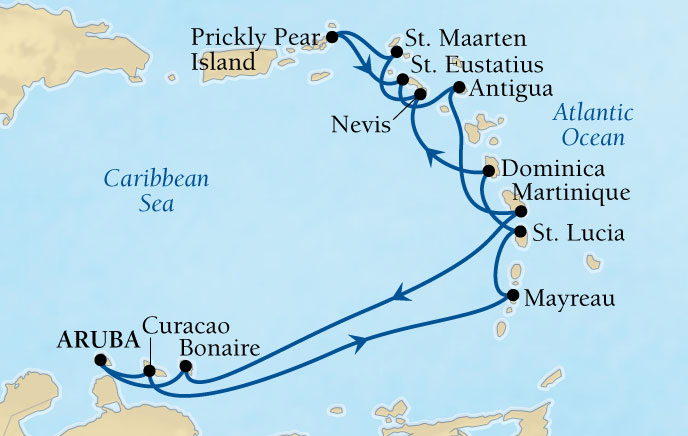