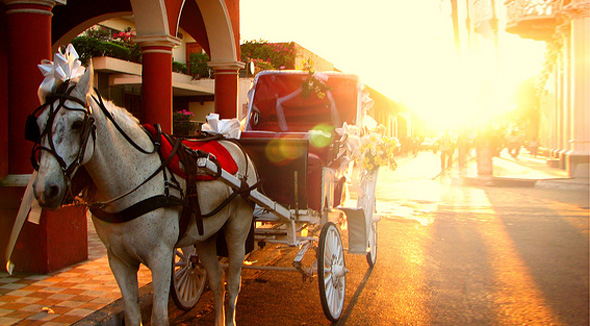 Established in 1524,Granada was the first city to be founded in Nicaragua by the Spanish. For three centuries it was the most important center of commerce in the country. It has a port strategically located on Lake Nicaragua.

Granada has the honor of being the oldest city on the mainland of the Western Hemisphere. With its colonial architecture and spectacular views, Granada is a true colonial jewel in Central America. Be sure to take a horse-drawn carriage ride through Granada. Baroque and Renaissance churches can be found among other colonial and Neoclassical buildings. The Cathedral, the City Hall, and the Social Club of Granada were constructed around the central plaza, a design which was typical of Spanish cities in the 16th century.

The San Francisco Church with its wide collection of animal-shaped idols is another interesting place in the historical center.

The islets in Lake Cocibolca make up an archipelago of volcanic at the foot of Mombacho volcano. The islets are only 10 minutes from Granada. Some the 360 islets are inhabited and the majority of them are covered with a great variety of tropical plants and fruit trees. The islands are an ideal place for birdwatchers.

The San Pablo Fort, strategically located on an island facing Granada, was built around the mid 1800’s to protect the city from pirates and privateers.