The Rosendal Manor House from 1665 gives a fascinating glimpse into the period when Norway was under Danish rule. In 1658, a destitute Danish noble by the name of Ludvig Rosenkrantz struck it lucky in marrying Karen Mowat, Norway’s richest hieress. Her money was soon put to use building the Rosendal Manor House in a stunning setting between mountain and fjord. Today, the Manor House and the gardens from 1850 are a living museum. Prior to dinner onboard this evening, we will enjoy a tour of the Manor House and a short concert in the Red Room.

Yacht docks right in the center of this city; the cradle of the Vikings, where Harald Haarfagre (Fairhair) became king of all Norway in 872. Great for strolling, the lovely market place and “Old Stavanger”, a cluster of old small white wooden house, are close by the dock. The landscape varies from fjords to steep mountains such as the Lysefjord and the Pulpit Rock, just an hour’s boat tour from the city center. Stavanger is also the oil capital of Norway where much of the support for the North Sea oil fields is based. The Petroleum Museum on the waterfront tells the story of this offshore oil adventure.

Skagen is Denmark’s northernmost city on the tip of Jutland and is the country’s main fishing port. It is well known for its painters as well as watches. The waterfront has daily fish auctions and is thriving especially in the summer months. You will find fascinating nature here with authentic Danish and Scandinavian culture. Some of the important museums include; Skagens Museum, Teddy Bear Museum and the Skagen Bunkermuseum. Other sights worth mentioning are the Skagen Fyr, Water Tower, Drachmanns Grave, The White Lighthouse, Redningsmanden statue and the ‘De blev derude’ monument in memory of the fisherman who drowned at sea.

Dover is considered the world’s busiest ferry port in the county of Dorset, in South East England. The port faces France across the narrowest part of the English Channel. The surrounding chalk cliffs have become world known as the White Cliffs of Dover. SeaDream will dock adjacent to the passenger terminal. Kindly check the Land Adventures tab for information regarding transfers and private arrangements from our destination specialists. 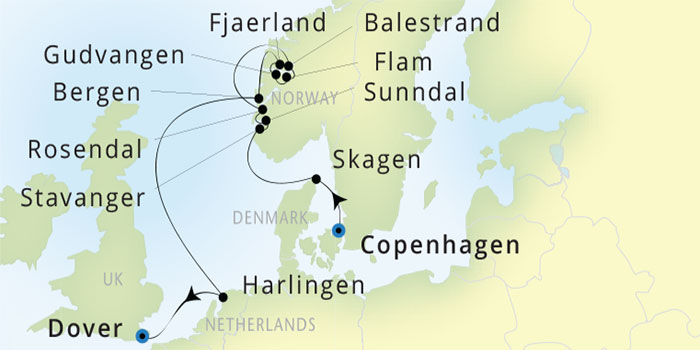