According to the popular 1960 beach movie, Fort Lauderdale is “where the boys are.” The city’s reputation as America’s Spring Break capital, however, has been replaced with the more favorable image of a prime family tourist destination, attracting more than 10 million visitors annually. The most popular beach resort in Florida is even more rightly famed as the “Yachting Capital of the World,” with more than 40,000 registered crafts calling its waters home. The city also prides itself on being the “Venice of America” with more than 300 miles of navigable waterways. Fort Lauderdale boasts world-class theaters, museums, sightseeing, and shopping.

The city sits 24 miles north of Miami and is named after a series of forts built by the United States during the second Seminole War. The forts took their name from Major William Lauderdale, who was the commander of the detachment of soldiers who built the first fort. Look hard and you might find remnants of three of them today. More people seem to be interested in taking a water tour aboard the “Carrie B.” 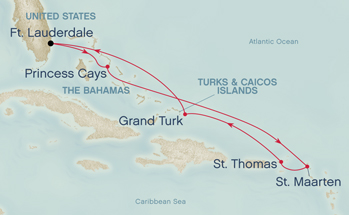