There is one main town on Hydra, known simply as “Hydra port”. It consists of a crescent-shaped harbor, around which is centered a strand of restaurants, shops, markets, and galleries that cater to tourists and locals (Hydriots). Steep stone streets lead up and outwards from the harbor area. The charm of Hydra town certainly lies in her rich history, beautiful port and waterfront unspoiled by motorized vehicles. The island offers a rugged charm and some spectacular scenes, and makes the perfect place for some self-exploration.

Galaxidi is a small village on the northern coast of the Corinth Golf lying west of Itea and 15 km southwest of Delphi. It allows excellent access to the incredible sight of Delphi which is within the top three archeological attractions in Greece and in 1987 was inscribed as a UNESCO Heritage Site. It is believed the Zeus wanted to find the center of the Earth so he sent two eagles flying from the eastern and western extremities and where they met was Delphi – becoming the “navel/center of the earth”. SeaDream has arranged the very best guides and vehicles from Athens to further enhance this incredible visit. Your guided visit highlights the ancient Sanctuary of Apollo, where Pythia, the celebrated Oracle dwelt, the Temple of Apollo, the Sacred Way, the amphitheater, the best preserved stadium of Greece, and the Castalia Spring, where in ancient days the pilgrims had to wash before they were allowed to consult the Oracle. In the Delphi Museum, see such treasures as the Omphalos, which marked the center of the world, and the magnificent bronze Charioteer, one of the finest pieces surviving from the 5th century BC. After the museum there will be free time to visit the village of Delphi. SeaDream has the option of docking along the small pier in Itea or anchoring off to provide water sports options.

Capri may very well be the most popular island on the planet? It is a beautiful Italian island in the Tyrrhenian Sea just off the Sorrentine Peninsula, on the south side of the Bay of Naples. Capri town is the island’s main population center. The island has two harbors, Marina Piccola and Marina Grande (the main port of the island). The separate village of Anacapri is located high on the hills to the west. From there visitors can continue up to the highest point Mt. Solero. Besides some simply amazing shopping boutiques, the island has so much to offer including the ever popular Grotta Azzura, Villa Jovis, Giardini di Augusto, Certosa di San Giacomo, Villa San Michele di Axel Munthe and the uniquely shaped Faraglioni rocks. SeaDream has put together most of the sights into one adventure called “Discovering the Island of Love” Kindly check the Land Adventures tab for more information. There’s also some great hikes available on the island, check with the activities team on board for more information. 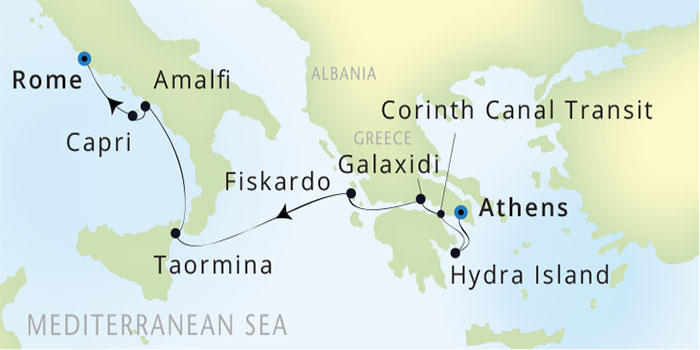 Mediterranean Cruise From Athens To Rome