An island almost as close to Africa as to Europe. Teeming with millennia of cultural heritage. How does it hang on through history? With passion. That’s Sicily. Where the people are some of Europe’s friendliest hosts. Where artistic and architectural monuments hail from countless centuries. Where you’ll ride among orange groves above the Mediterranean Sea as Mount Etna simmers on the horizon. Savor seafood that forever raises the bar. Grilled swordfish. Snapper prepared cipollata, served with bold red Nero d’Avola. Then indulge in cannoli filled on the spot with impossibly fresh ricotta. Ready to surrender to an island’s passions? Let it be Sicily.
Marvel at views of Mount Etna, the largest active volcano in Europe

Ascend the 142 tiled stairs of Caltagirone

Indulge in the island’s bounty, from prosciutto and ricotta to wine and olive oil

Days 2-3 Ascend the 142 tiled stairs in Caltagirone, inhabited since the Bronze Age and renowned for intricately painted ceramics The fragrance of orange blossoms wafts by as you pedal a route lined with windmills, orchards and olive groves A local ceramic artist opens his studio just for us Taste fresh-pressed olive oil at a centuries-old agriturismo set in a valley of cherry, almond and citrus trees.

Days 5-6 Marvel at archaeological treasures Seafood antipasti, sardines and other local favorites melt in your mouth at a lively pescheria, which serves up good times and great food Enjoy a stroll through Siracusa’s old city, Ortigia Soak up the Sicilian sun and swim in the crystal-clear Mediterranean at our hotel’s private beach. 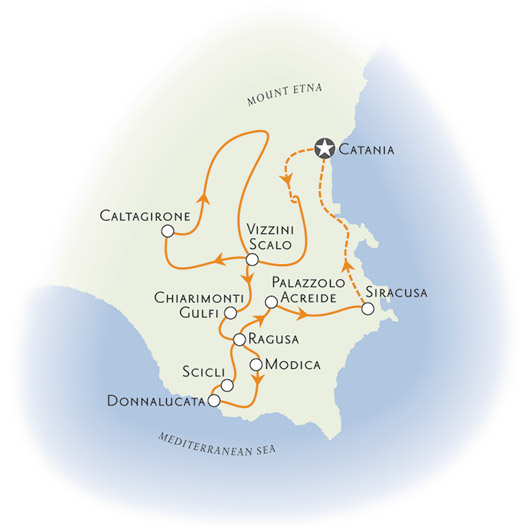