You’ll really get a kick out of this itinerary: a leisurely cruise around the boot, of Italy. You’ll embark the m/v Tere Moana in Civitavecchia, jumping-off point for the Eternal City Rome and set sail for the beautiful island of Lipari. Enjoy time to explore medieval Taormina, on the east coast of Sicily next, before cruising to Corfu, one of the most popular Greek isles.

Discover why the historic Old Towns of Kotor, Montenegro, and Dubrovnik, Croatia, have been designated UNESCO World Heritage Sites over the next couple of days, and sail on to Hvar, acclaimed as one of the world’s ten most beautiful islands. Your voyage concludes in Venice, Italy’s romantic City of Canals.,

The heart of the ancient Roman empire and capital of modern Italy, Rome is one of the world,™s great cultural centers, and an abundance of monuments, cathedrals, artistic masterpieces, and more reflect the city,™s rich ancient, medieval, and Renaissance history. You,™ll embark The Moana in the nearby port city of Civitavecchia and enjoy time to settle into your stateroom before the ship sets sail this evening.

The largest of the Aeolian islands a volcanic chain in the Tyrrhenian Sea, off the north coast of Sicily this ruggedly beautiful island delights the eye with steep cliffs tumbling down to a blue sea. Along the shoreline, you,™ll find numerous beaches available, or spend time exploring the main town, also called Lipari, where an archaeological park showcases the city,™s ancient Greek roots.

Your port call on Giardini Naxos, on Sicily,™s east coast, offers you access to medieval Taormina, which has inspired such writers as Goethe and D.H. Lawrence with its splendid views of Mount Etna and the Ionian Sea. As a stop on the European Grand Tour of the 19th century, it became Sicily,™s first resort and remains its greatest one to this day. Attractions include a charming medieval quarter and castle ruins, as well fine shopping and dining. And excellent beaches are just a cable-car ride down the hill away.

One of the most popular Greek islands, Corfu is revered for its lush mountainous landscape, golden beaches, traditional villages, Venetian fortresses, and some of the most beautiful beaches on the Ionian Sea. In Corfu Town, admire a charming mix of architectural styles, as well as welcoming French-designed city squares.

Situated on the only natural fjord of its kind in the world one of the most beautiful bays in the world spectacular Kotor captures the spirit of Montenegro with its blend of exuberant youth and ancient traditions. Explore the Old Town, which was named a UNESCO World Heritage Site for its amazingly well-preserved medieval architecture.
Day 6 Dubrovnik, Croatia

Nicknamed the Pearl of the Adriatic, by George Bernard Shaw, Dubrovnik is Europe,™s best-preserved walled city. The heart of the city is the Stradun (also known as the Plaka), the gleaming, wide, marble-paved thoroughfare that dates to the 13th century, and the Stari Grad the extraordinarily well-preserved old city has been named a World Heritage Site by UNESCO, which is helping to restore the city,™sbeautiful Gothic, Renaissance, and Baroque churches, monasteries, palaces, and fountains.

The queen, of Croatia,™s spectacular Dalmatian islands, Hvar has been acclaimed as one of the world,™s ten most beautiful islands by CondÃ© Nast Traveler and the U.K.,™s Traveller magazine, revered for its scenic beauty, rich history, and mild climate. The city of Hvar features one of the largest and most beautiful town squares in Croatia, and scenic strolling abounds.
Day 8 Disembark in Venice, Italy

The romantic City of Canals, and capital of the Veneto region of northeast Italy, Venice was also once the capital of the Republic of Venice, a major power during the medieval and Renaissance eras. Admire the city,™s legendary beauty as you disembark The Moana after breakfast this morning. 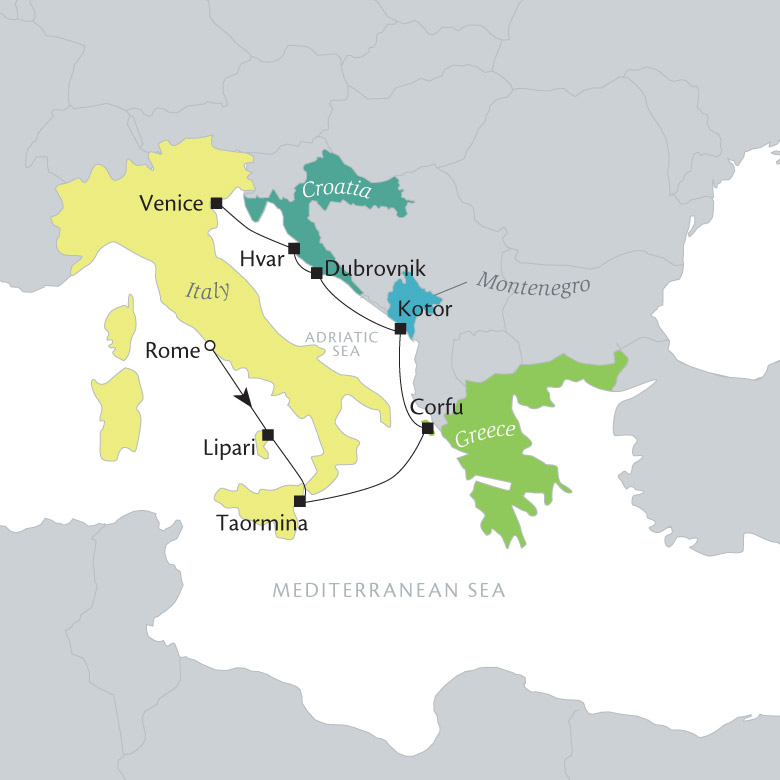