Victoria may be Australia’s smallest continental state, but Melbourne, its capital, is big on everything. With a population of 2.7 million people living in 59 separately named communities within 715 square miles, Melbourne is a sprawling city offering culture, art, fashion and friendly, sports-minded Australians. It is also an easy city to explore. At the heart of the city is the Golden Mile, the city’s governmental and commercial center, home to hotels, shops, restaurants and theaters.

Originally part of New South Wales, Victoria became a colony in its own right in 1851. The discovery of gold propelled Melbourne’s growth to prominence and prosperity. 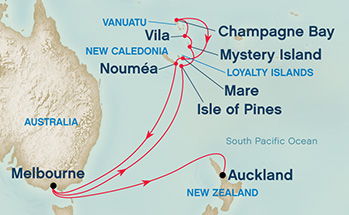