It’s one of those memories that forever sparkle for us: Rambling along on elephantback in the bush on a warm, bright African day in Shambala, accompanied by a clan of warthogs, trotting along with their tails held high, as if in salute to the fun of it all.

Before we meet up with the elephants, we spend a couple of unusually in-depth days in Cape Town and environs, then head to a real African revelation, the Sabi Sabi Game Reserve and its splendid Bush Lodge. Onward to the Shambala Private Game Reserve’s Zulu Camp and close encounters with “our elephant hosts . . . as warm and cordial as any creatures ever created.”

Day 1 En route
The adventure begins as we board our international flight.

Days 2 to 4 Cape Town and environs
Our days in Cape Town will be eventful, another reason to savour the Travel+Leisure multi-award winning One&Only Cape Town on the Victoria & Alfred Waterfront. (Other reasons: One&Only’s renowned spa—to which you’re invited as  guest; its extraordinarily attractive interior design; its dedication to graceful hospitality; and the One&Only’s location on the high-spirited waterfront, complete with bang-up views of Table Bay, Devil’s Peak, Signal Hill, Lion’s Head, and of course Table Mountain, which may be, as David Livingstone saw it in 1841, draped “with its beautiful table cloth of fleecy clouds.”)
On our first day we’ll pay a visit to Rosie’s Kitchen in Khayelitsha Township for a close look (and, if we’d like, the loan of our helping hands) as Rosie helps feed—as she has for the last couple of decades—the township’s destitute kids and elders. We’ll meet Golden, a beloved artisan who enlists kids to collect discarded tin cans, from which he creates stunning, keepsake “flowers.” And, of course, we’ll take the cable car to the top of Table Mountain, which, we’re told, is six times older than the Himalaya and so strikingly flat because it was overlaid long ago by an ice sheet (that it’s gorgeous and fascinating we don’t have to be told). We’ll dine tonight in the home of Capetonian friends and hosts, great purveyors of welcome and lore.
And we’ll take a full-day tour of the Cape Peninsula, including a trip on the Flying Dutchman Funicular to the tip of dramatic Cape Point, where we’ll look out at the great waters of the Atlantic tussling with the equally insistent waters of the Indian Ocean. We’ll visit Cape penguins in their daily rounds, ramble in Victorian-flavoured Simon’s Town, and at dinner tonight we’ll be treated to thrilling South African interactive drumming, which must be seen and heard to be believed, and which will make true, bedazzled believers of us.

Days 5 to 7 Sabi Sabi Game Reserve
A morning flight takes us to three nights at Bush Lodge, flagship of the Sabi Sabi Game Reserve, a gleaming African gem. Bush Lodge’s thatched, air-conditioned, magnificently appointed suites—fanciers of African art, take note—look out at the serene bushveld and a nearby water hole, popular with the reserve’s non-human residents, which include the Big Five and forty or fifty other notable species (not to mention 350 bird species).
Sabi Sabi is linked to nearby Kruger National Park by a well-trod game corridor; a fence separating the two was removed some years ago, enriching gene pools and honouring the wandering spirit of African wildlife. As a consequence, game viewing in Sabi Sabi is superb, and our enthusiastically guided game drives are some of Southern Africa’s most rewarding.

Days 8 to 10 Shambala Private Game Reserve
We wing our way to Johannesburg and drive onward to the Waterberg, northern South Africa’s first UNESCO Biosphere Reserve. We’ll be luxuriously ensconced for three nights in the thatched chalets of Zulu Camp, in the Waterberg’s Shambala Private Game Reserve, set beside a river, serenaded by birdsong.
Zulu Camp’s beehive chalets, decorated in Afro–French Provincial style, feature refreshing outdoor rain showers, indoor bathtubs, and a 24-hour-a-day supply of serenity. The camp’s cuisine and wine cellar are stellar, its spa is second to few, and game drives into the reserve are consistently rewarding: the Big Five are in residence, along with their customary supporting cast of zebras, impalas, and wildebeest, and some rare guest stars like the bat-eared caracal and large-spotted genet.
But it’s our elephant-back sojourns that make this safari so memorable. Zulu Camp’s profoundly good-natured elephants—orphans brought here years ago from Zimbabwe and cosseted by their lifelong handlers—take us on breezily swaying rides into the bush (we’ll also get photos with the big beauties during our ride). As far as the local denizens go, we’re not-very-interesting decorations atop the champ, the one animal no wise animal dares bother.
Imagine…getting up on the broad back of the planet’s largest land animal and moseying along, looking down fascinatingly at insouciant lions, etcetera. We’re in the midst of a very animal world here, but our elephant hosts are as warm and cordial as any creatures ever created.

We’ll drive back to Johannesburg for our return flights on the evening of Day 11, arriving home the next day. 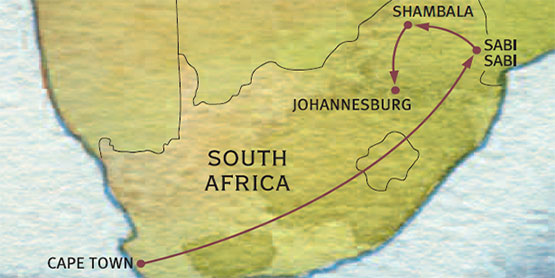