Istanbul historically known as Constantinople is the largest city in Turkey and 5th largest city proper in the world with a population of over 14 million, also making it the second largest metropolitan area in Europe by population. Istanbul was selected as a European Capital of Culture for 2010. Historic areas of the city were added to the UNESCO World Heritage List in 1985. Istanbul is a transcontinental city, straddling the Bosporus, one of the world’s busiest waterways in northwestern Turkey. It is situated between the Sea of Marmara and the Black Sea. Its commercial and historical center lies in Europe, while a third of its population lives in Asia. SeaDream calls to this wonderful destination both as an embarkation point and a destination offering several land adventures. Please check the Land Adventures tab for all of the possibilities as well as embarkation and transfer information.

Kepez is a seaside town in the Canakkale Province in Turkey. From Kepez SeaDream offers a unique Land Adventure to the ruins of the ancient city of Troy (Unesco Heritage Site). The movie starring Brad Pit although filmed in Malta has the actual Trojan Horse in Canakkale. Another “don’t miss” option would be to visit perhaps the most moving site in all of Turkey: Anzac Cove and the World War I battlefields of Gallipoli. We recommend that you make time and visit this hauntingly beautiful area where for more than nine months (1915-16) Allied and Turkish troops faced one another in one of the world’s most tragic battles to gain control of this most important waterway ” the Dardanelles.

Santorini also known as Thera is a volcanic island located in the southern Aegean Sea, about 200 km (120 mi) southeast from Greece’s mainland. Santorini is essentially what remains of an enormous volcanic explosion, destroying the earliest settlements on what was formerly a single island, and leading to the creation of the current geological caldera.

Venice has been known as the “Queen of the Adriatic”, “City of Water”, “City of Masks”, “City of Bridges”, “The Floating City”, and “City of Canals”. Luigi Barzini, writing in The New York Times, described it as “undoubtedly the most beautiful city built by man”. Venice has also been described by the Times Online as being one of Europe’s most romantic cities. Founded in the 5th century, the city stretches across 118 small islands in the marshy Venetian Lagoon along the Adriatic. In 1987 Venice and its Lagoon was inscribed as an UNESCO Heritage site. 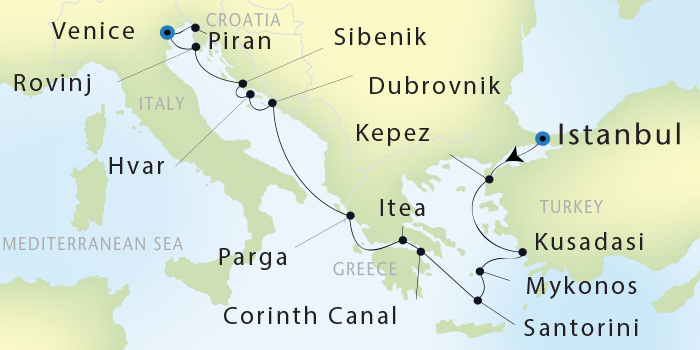