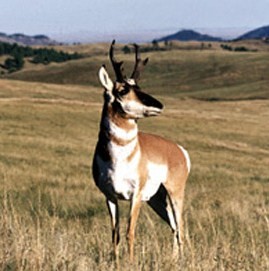 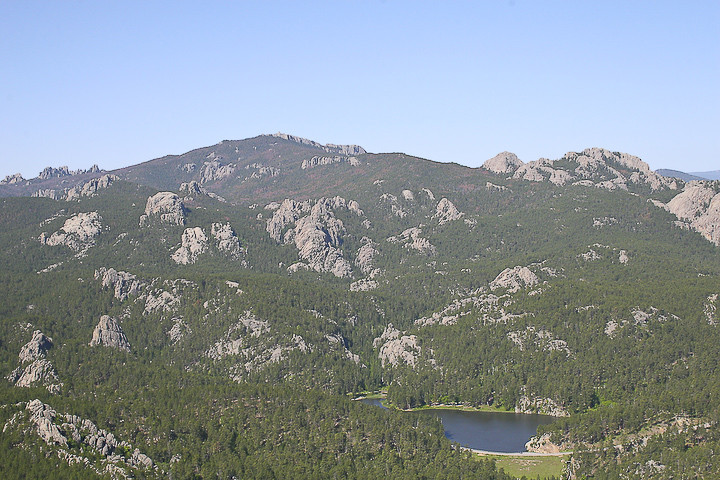 The Black Hills are a small, isolated mountain range rising from the Great Plains of North America in western South Dakota and extending into Wyoming, USA. Set off from the main body of the Rocky Mountains, the region is something of a geological anomaly,accurately described as an “island of trees in a sea of grass”. The Black Hills encompass the Black Hills National Forest and are home to the tallest peaks of continental North America east of the Rockies.

The name “Black Hills” is a translation of the Lakota. The hills were so-called because of their appearance from a distance, covered in trees.

The Black Hills opposite Mount Rushmore. The region is home to Mount Rushmore National Memorial, Wind Cave National Park, Jewel Cave National Monument, Harney Peak (the highest point east of the Rockies), Custer State Park (the largest state park in South Dakota, and one of the largest in the US), Bear Butte State Park, Devils Tower National Monument, and the Crazy Horse Memorial (the largest sculpture in the world). The Black Hills also hosts the Sturgis Motorcycle Rally each August. Started in 1940, the 65th Rally in 2005 saw more than 550,000 bikers visit the Black Hills; the rally is a key part of the regional economy.

The George S. Mickelson Trail is a recently opened multi-use path through the Black Hills. It follows the abandoned track of the historic railroad route from Edgemont to Deadwood. The train used to be the only way to bring supplies to the miners in the Hills. The trail is about 110 miles in length, and can be used by hikers, cross-country skiers, and bikers. The cost is two dollars per day, or ten dollars annually.

Today, the major city in the Black Hills is Rapid City, with an incorporated population of over 70,000 and a metropolitan population of 125,000. It serves a market area covering much of five states: North and South Dakota, Nebraska, Wyoming, and Montana. In addition to tourism and mining (including coal, specialty minerals, and the now declining gold mining), the Black Hills economy includes ranching (sheep and cattle, primarily, with buffalo and ratites becoming more common), timber (lumber), Ellsworth Air Force Base, and some manufacturing, including jewelry (Black Hills Gold Jewelry), cement, electronics, cabinetry, guns and ammunition. In many ways, the Black Hills functions as a very spread-out urban area with a population (not counting tourists) of 250,000. Other important Black Hills cities include Belle Fourche, a ranching town; Spearfish, home of Black Hills State University; Deadwood, a historic and well-preserved gambling mecca; its twin city of Lead, home of the now-closed Homestake Mine (gold); Keystone, outside Mount Rushmore; Hill City, a timber and tourism town in the center of the Hills; Custer, a mining and tourism town and headquarters for Black Hills National Forest; Hot Springs, an old resort town in the southern Hills; Sturgis, originally a military town (Fort Meade, now a VA center, is located just to the east); and Newcastle, center of the Black Hills petroleum production and refining.

Black Hills in popular culture:  Several major motion pictures have been filmed in the Black Hills including North by Northwest, How the West Was Won, A Man Called Horse, Lakota Woman and Dances with Wolves, as well as National Treasure: Book of Secrets. The Black Hills has been the setting of still more movies or portions thereof, including Walt Disney’s The One and Only Genuine Original Family Band and several movies based on Louis L’Amour novels. Steven Spielberg’s Into the West includes a story line involving the discovery of gold in the Black Hills. The Black Hills is also the setting for the popular HBO series Deadwood, although the show is actually filmed in California. However, the City Fathers of Deadwood have created a wooden “false front” street similar to the television set and the original town , a series of fires in the late 1800s destroyed all the original log and frame buildings, which were replaced with the brick and stone structures which grace the city today.

The film Calamity Jane included the song “The Black Hills of Dakota,” a salute to the mountains that the characters were traveling through.

The song “Rocky Raccoon” by The Beatles, makes a reference to “the black mountain hills of Dakota,” where the song’s protagonist allegedly lives.

Pain of Salvation recorded a song referring to the disposition of the Lakota, titled “Black Hills”, on their One Hour by the Concrete Lake album.

The Black Hills also made an attempt at secession from the United States in the book World War Z.

Native Americans have a long history in the Black Hills. When gold was discovered in 1874, a gold rush swept the area prompting the US government to re-assign the local Native Americans to other reservations in western South Dakota. Unlike the rest of the Dakotas, the Black Hills were settled primarily from population centers to the west and south of the region, as miners flocked there from earlier gold boom locations in Colorado and Montana.

Today, the nearby reservations and Ellsworth Air Force Base make for a unique diversity in population different from that of the rest of Wyoming or South Dakota. As the economy of the Black Hills has shifted from natural resources (mining and timber), the hospitality and tourism industry has grown to take its place. The major tourist spots include Mount Rushmore, Custer State Park, Crazy Horse Memorial, and the Sturgis Motorcycle Rally.

Black Hills History: American Indians have inhabited the area since at least 7000 B.C. The Arikara arrived by 1500 A. D., followed by the Cheyenne, Crow, Kiowa and Pawnee. The Lakota arrived from Minnesota in the eighteenth century and drove out the other tribes, claiming the land, which they called Paha Sapa, for themselves.

After the public discovery of gold in the 1870s, the conflict over control of the region sparked the last major Indian War on the Great Plains, the Black Hills War. The 1868 Treaty of Fort Laramie had previously confirmed the Lakota (Teton Sioux) ownership of the mountain range. But with that treaty being contested, they additionally claimed rights to the land saying that in their culture it was considered the axis mundi, or sacred center of the world. Some consider this ad hoc claim of spiritual status a dubious pretension to keep the gold-rich territory since the Sioux tribe had only discovered the Black Hills about 100 years earlier (1765) and that they themselves took the land by force from its previous residents (the Cheyenne tribe) in 1776.

Although rumors of gold in the Black Hills had circulated in North America for decades, Brevet Major General George Armstrong Custer of the 7th US Cavalry led an expedition into the Black Hills in 1874 and discovered gold in French Creek in the Southern Black Hills. An official announcement of the presence of gold was made through newspaper reporters who accompanied the expedition. The following year, the first detailed survey of the Black Hills was conducted by the Newton-Jenney Party. The surveyor for the party, Dr. Valentine McGillycuddy, was the first white person to ascend to the top of Harney Peak, the highest point in the Black Hills, reaching 7242 feet above sea level.

During the 1875-1878 gold rush, thousands of miners went to the Black Hills; in 1880, the area was the most densely populated part of Dakota Territory. There were three large towns in the Northern Hills: Deadwood, Central City, and Lead. Around these lay groups of smaller gold camps, towns, and villages. Hill City and Custer City sprang up in the Southern Hills, and railroads were already reaching the previously remote area. From 1880 on, the gold mines yielded about $4,000,000 annually, and the silver mines about $3,000,000 annually.

Inyan Kara is a sacred mountain to Lakota.Following the defeat of the Lakota and their Cheyenne and Arapaho allies in 1876, the United States took control of the region from the Lakota in violation of the Treaty of Fort Laramie. The Lakota never accepted the validity of this purchase, and the area remains under dispute to this day.

On July 23, 1980, in United States v. Sioux Nation of Indians, the Supreme Court of the United States ruled that the Black Hills were illegally taken and that remuneration of the initial offering price plus interest , nearly $106 million , be paid. The Lakota refused the settlement, as they wanted the return of the Black Hills instead. The money remains in an interest-bearing account which now amounts to over $757 million, and in spite of their poverty the Lakota still refuse to take the money.

The outermost feature of the dome stands out as a hogback ridge. This ridge is made out of the Lakota Formation and the Fallriver sandstone which are collectively called the Inyan Kara Group. Above this the layers of rocks are less distinct and are all mainly grey shale with three exceptions, the Newcastle sandstone, the Greenhorn limestone which contains many shark teeth fossils, and the Niobrara Formation which is composed mainly of chalk. These outer ridges are called cuestas.

Good Morning Sharon- I would like you to know…or perhaps you already know and this is just a reminder…of how much you truly mean to both Susan and me. Everyone as they are growing up.... Read More