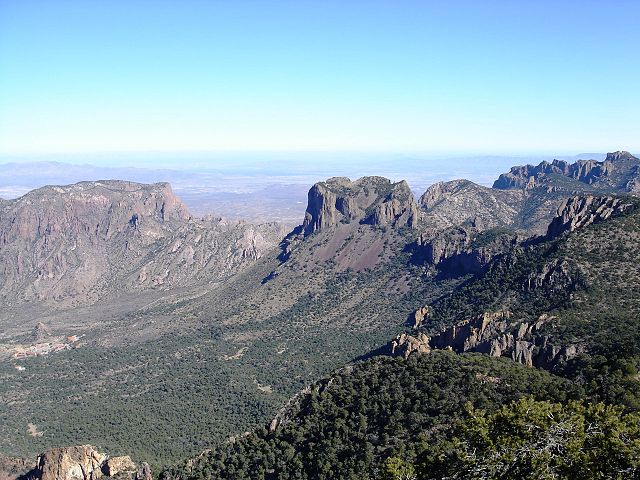 Big Bend National Park encompasses more than 800,000 acres in southwest Texas. For more than 1,000 miles, the Rio Grande forms the international boundary between Mexico and the United States; Big Bend National Park administers approximately one-quarter of that boundary. Within the 118 twisting miles that also define the park’s southern boundary, the river’s southeasterly flow changes abruptly to the northeast and forms the big bend of the Rio Grande.

Because the Rio Grande serves as an international boundary, the park faces unusual constraints when administering and enforcing park rules, regulations, and policies. The park has jurisdiction only to the center of the deepest river channel; the rest of the river lies within the Republic of Mexico.

South of the border, people call the Rio Grande by its Spanish name, Rio Bravo del Norte. South of the river lie the Mexican states of Chihuahua and Coahuila and the new protected areas for flora and fauna, which are comprised of regions known as the Maderas del Carmen and the Canon de Santa Elena.

San Vicente Canyon: Big Bend National Park has national significance as the largest protected area of Chihuahuan Desert topography and ecology in the United States. Few areas exceed the park’s value for the protection and study of geologic and paleontologic resources. Cretaceous and Tertiary fossil organisms exist in variety and abundance. Archeologists have discovered artifacts estimated to be 9,000 years old, and historic buildings and landscapes offer graphic illustration of life along the international border at the turn of the century.

The park exhibits dramatic contrasts; its climate may be characterized as one of extremes. Dry, hot late spring and early summer days often exceed 100 degrees in the lower elevations. Winters are normally mild throughout the park, but sub-freezing temperatures occasionally occur. Because of the range in altitude from approximately 1,800 feet along the river to 7,800 feet in the Chisos Mountains, a wide variation in available moisture and in temperature exists throughout the park. These variations contribute to an exceptional diversity in plant and animal habitats.

The 118 river miles that form the southern park boundary include the spectacular canyons of Santa Elena, Mariscal, and Boquillas. The Rio Grande, meandering through this portion of the Chihuahuan Desert, has cut deep canyons with nearly vertical walls through three uplifts comprised primarily of limestone. Throughout the open desert areas, the highly productive Rio Grande riparian zone includes various plant and animal species and significant cultural resources. The vegetative belt extends into the desert along creeks and arroyos.

Hikers regard the Rio Grande: Cultural resources in the park range from the Paleo-Indian period 10,500 years ago through the historic period represented by Native American groups, such as the Chisos, Mescalero Apache, and Comanche. More recently, Spanish, Mexican, and American settlers farmed, ranched, and mined in the area.

Throughout the prehistoric period, humans found shelter and maintained open campsites throughout the park. The archeological record reveals an Archaic-period desert culture whose inhabitants developed a nomadic hunting and gathering lifestyle that remained virtually unchanged for several thousand years.

Big Bend National Park lies in south Brewster County, one of the most sparsely populated areas of the country. Brewster County consists of 6,204 square miles and has a population of approximately 13,000 people. Most of the population resides in two towns: Marathon and Alpine, which lie 69 and 100 miles respectively to the north and northwest of park headquarters. The western gateway communities of Study Butte, Terlingua, and Lajitas have experienced growth in recent years but still lag behind Marathon and Alpine in terms of population.

Exploring Santa Elena Canyon: There are as many ways to enjoy Big Bend as there are people who visit. The diversity of recreational options here offers something for almost everyone. While many visitors are content to enjoy Big Bend from the comfort of the paved scenic drives, others with rugged vehicles prefer the challenge and remoteness of the park’s many unimproved dirt roads.

Any park ranger will tell you that neither desert nor mountains will truly reveal themselves to a motor vehicle. To experience the best of Big Bend, you should get out on foot, if only for a short time, and become part of the landscape. Listen to the desert silence, smell the creosotebush, and gaze towards a distant mountain range, and you will soon realize how special this place is.

How NOT to die in the Desert: With over 800, 000 acres of remote desert and mountains, visitors to Big Bend can wander and explore to their hearts content. But with this freedom comes risk. Every year, park staff must rescue hikers who either underestimate the terrain and/or temperatures or overestimate their own abilities. This environment is not forgiving; hikers have died here after going just a few hours without water.

Talk to park staff. Find out about road and trail conditions, get trip advice, and buy the maps and guidebooks you need. Check the weather forecast, too
.
Let someone know where you’re going. Call family or friends at home to let them know your plans. Tell the camp hosts in the campground. Leave a note on your car stating where you’re going hiking and when you expect to return.

Make sure your vehicle is in good condition and has a spare tire, a working jack, and other emergency equipment. Take extra water, food, and sleeping bags just in case. If youâ„¢re on foot, make sure all of your hiking and camping gear is in good shape.
If your vehicle breaks down or gets stuck, stay with it! It is much easier for rangers to find a car on a road than a person walking through the desert.

Know how to signal for help. Cell phones may not work here, so donâ„¢t count on being able to call out. Whistles, air horns, mirrors, and flares are all good attention-getters. While wood fires are not normally permitted in the park, they can be an effective signaling method of last resort, since the smoke can be seen for miles and will certainly get the attention of park rangers.

Have fun exploring Big Bend, but remember that YOU are responsible for your own safety. Plan ahead and stay alive!

Safety in the Sun
Even on short hikes, always take water or a sports drink. Wear a hat and loose-fitting long sleeves and long pants, and use sunscreen on all exposed skin.

Never underestimate the importance of drinking enough water out here. In Big Bend’s arid climate, your body loses water much faster than usual. Even a little physical activity, particularly in the heat of the day, greatly accelerates water loss. Headache, tiredness, and crankiness are signs that dehydration has already set in. (Thirst is an unreliable indicator; you may already be dehydrated before feeling thirsty.) Start your day in Big Bend well-hydrated, and continue to drink non-caffeinated and non-alcoholic beverages throughout the day.

Food is important, too, in order to replace the electrolytes that your body loses through sweating. Salty snacks help to maintain the electrolyte balance.

Dear Linda, Thank you for making our dream vacation to Alaska possible! Especially when we were told by a local travel agency that Alaska was sold out. We don,™t know how you managed to get.... Read More